Isis and the Illicit Trade of Artifacts

From looted archaeological sites to
the art market: how the illicit trade
supports the Islamic State

Looting with Buldozers near Raqqa.

In the past year, ISIS has become increasingly involved in the illegal looting and selling of antiquities. Their expanding footprint has been precipitated by both the lucrative nature of the illicit trade and the damage ISIS’s financial infrastructure has sustained since the beginning of Coalition airstrikes. When ISIS occupied large swathes of Syria and Iraq during its important offensives of 2014, it found a blackmarket for antiquities and artifacts already in place, though not on the scale the organization has presently established.

An extremely efficient and obsessively bureaucratic organization, ISIS began to take full advantage of the illicit trade a an addition to its already extensive financial resources that includes ransom, natural resources, and taxation, to name a few.

In early 2014 ISIS began its involvement in the illicit antiquities trade by issuing permits to loot archaeological sites. The permit seekers were most often locals or contractors who claimed to have knowledge or information pertaining to hidden “treasure troves”. In return, these locals and contractors were required to pay a tax, based upon an Islamic Sharia’a law interpretation know as khums. 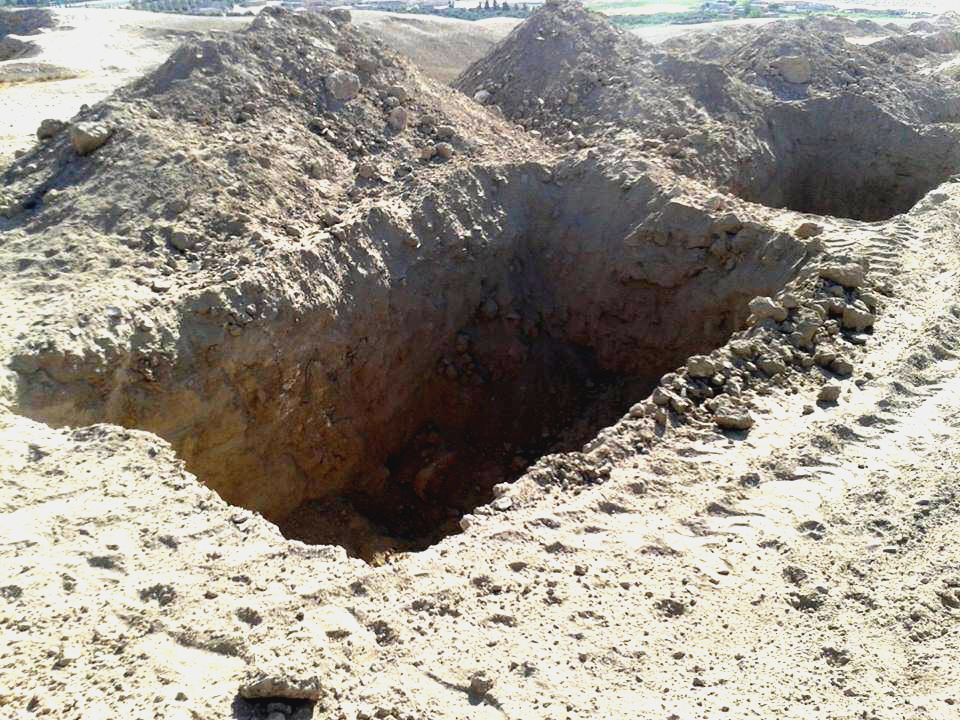 Looting with Buldozers near Raqqa.

The law requires all Muslims to pay a fifth, or 20%, of the value of any treasure discovered to the state. By fall 2014, however, in keeping with its methodical approach to governance and administration, ISIS established the Manbij Archaeological Administration (MAA) to manage and organize the systematic looting of archaeological sites in the region. With ISIS’s aggressive expansion into the illegal trade, the MAA has become regularly involved in directly digging and looting sites. They routinely use earth-moving machinery, including bulldozers and trucks, to accelerate the digging and recovery process, which intensifies the amount and rate of destruction to archaeological sites in the region. Many archaeological sites have been deeply scarred as a result.

Since the establishment of the MAA, the antiquities trade is now centered in and around the towns of Jerablus and Manbij in northern Syria, close to the Turkish borders, due to readily available smuggling routes and networks which ease the transfer of objects from Syria into Turkey. The MAA continues to issue licenses allowing local individuals and contractors to dig on private land or on public land under the control of ISIS. However, there is now increasing reliance on ISIS’s own digging operations established and managed directly by the MAA.

Looted antiquities are inspected by agents of the MAA to identify items otf special interest or significant financial value (including precious metals such as gold). ISIS particularly values archaeological artifacts from the Islamic period: any such items are immediately confiscated by ISIS and processed by the MAA directly. Otherwise the looters are given a grace period of twenty days to find buyers for their goods. Items In early 2014 ISIS began its involvement in the illicit antiquities trade by issuing permits to loot archaeological sites 21 approach to governance and administration, ISIS established the Manbij Archaeological Administration (MAA) to manage and organize the systematic looting of remaining unsold after that are gathered up by the MAA and then sold directly by ISIS through its own established network of dealers and middlemen. They charge a 50% tax on the value of the sale in this event.

The MAA organizes the sale and transfer of artifacts it acquires either directly through its own digging operations, or through confiscation for reasons cited above. The MAA has established a network of approved dealers, to whom the looted antiquities are sold, and middlemen who facilitate these sales. Once sales are completed, goods are transported to the Turkish borders, sometimes escorted by ISIS fighters, where they are then smuggled across into Turkey and resold there primarily to Turkish dealers, although there have been reports of foreigners (Russians and Syrians) coming to purchase them as well.The Turkish cities of Orfa and Gaziantep are considered to be centers for this activity. It should be noted that the Turkish authorities are clamping down on the this illicit trade with seizures of looted antiquities from Syria and Iraq being regularly reported.

2015 has also heralded a darker and more sinister manifestation of ISIS’s control and exploitation of cultural heritage, but this time in the city of Mosul in neighboring Iraq. In what can only be described as cultural atrocities, ISIS very publicly set out to destroy the contents of the Mosul museum and the archaeological sites of Nimrud and Hatra (most likely extensively looting them as well). These atrocities shocked the world, allowing ISIS to demonstrate its ability to both act with impunity and the impotence of the international community to prevent these atrocities. Today as ISIS occupies the city of Palmyra in Syria, a UNESCO designated World Heritage site, fears are being raised as to what fate awaits these majestic ruins. There are no doubts that the ruins of Palmyra offer a great opportunity for ISIS to loot a rich archaeological site and museum, with plenty left over for a public cultural heritage atrocity

Image courtesy of DigitalGlobe/U.S. Bureau of Educationa and Cultural Affairs.

If this happens, ISIS’s ability to act with impunity and the international community’s inability to stop them will be clearly demonstrated again.

ISIS is clearly involved and profiting at every level from the illicit trade of antiquities, from their initial extraction from the ground to their final sale and exit from Islamic State controlled territory. ISIS as an organization today is probably the richest radical terrorist organization in contemporary history with widely diversified sources of income. There is no doubt that looting and illicit trade in antiquities is highly lucrative, enough for ISIS to be deeply involved. Stopping this illicit trade inantiquities therefore must be an imperative not only because it is a major source of income for terrorist organizations like ISIS, but also because it’s causing irreparable damage to Syria’s cultural heritage.
The importance of this cultural heritage is nowhere more demonstrable than the issue of national identity and what makes a Syrian a Syrian. Syria has a resilient sense of identity based on the concept of a shared citizenship around a common history, supported by a long and rich cultural heritage. Once the current violence ends, the people of Syria will need to find ways to reconnect with the symbols that once united them across religious and political lines. The country’s ancient past as represented in this rich cultural heritage will be key to this. Protecting and preserving Syria’s history and heritage therefore is about safeguarding its future, too.