On Contemporary Extremism and Cultural Oppression

“In Medieval times, discrete attempts to diverge from authoritative ideology were tolerated by the Islamic ruling class for art’s sake, fostering a more liberal and independent society of artists. With the emergence of ISIS, we witness the complete suppression of critical thought and freedom of thinking”

As long as there have been religions, there have been sects. As long as there have been religions and sects, there have been vicious wars between sects. No matter which division, the proclamation of faith written on the flag of ISIS lā ilāha illā allāh (“There is no god but Allah”) is the same phrase written on Islamist medieval coins since the 8th century, and continues to be seen on the flag of ISIS. In addition to spreading Islam being the main goal of these regimes, the suppression of free thought (whether non-muslim or sectarian) has also been a constant thread. However, while non-orthodox thinkers were supposedly suppressed by Islamist regimes, we see a flourishing of culture in the medieval period which actually made this time the golden age of Islam.

In fact, much of the medieval ruling class was made up of fighters and aristocrats, whose morals were based on either a very specific ideology or no ideology but rather loyalty to whomever was paying. Artisans have always been affected by regimes; however not as much as the warrior or upper class. The medieval artist was always in limbo as he was dependent upon upper class patrons, yet he was less directly involved in the ruling and conquering aspects of society. As the medieval artisan belonged to a mid to lower class, he was less indoctrinated yet needed to produce works of art that appealed to the rulers. Therefore he had to act with a level of caution. While there is not much recorded history that articulates the lives of medieval artisans, it is generally thought that they were part of a skilled and overall perhaps liberal population trying to question the status-quo while not getting killed for it. This led to a surge of creativity as artists, poets, and mystics found ways to express their spirituality while also appealing to the ruling orthodoxy. On the side of the ruling class, hints at non-orthodoxy were allowed as long as they were inconspicuous and underhanded. 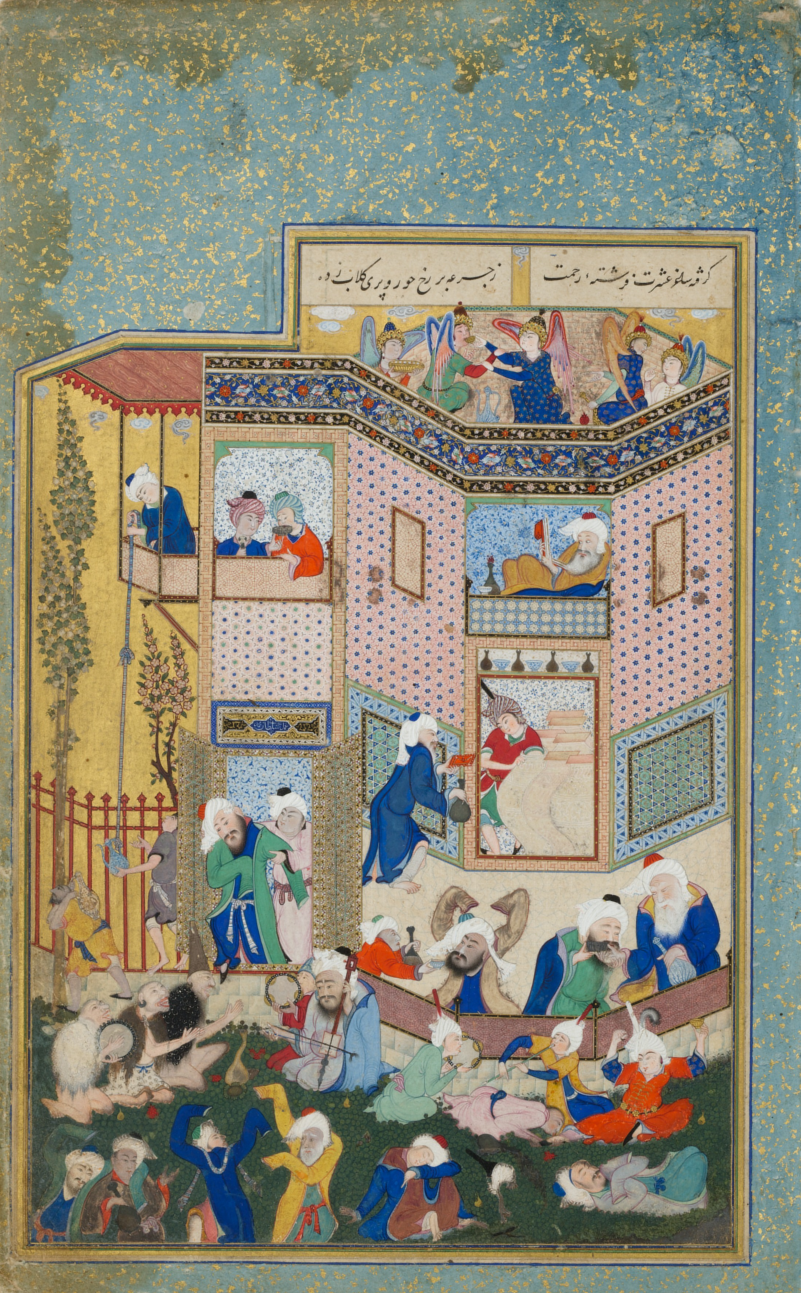 Allegory of Worldly and Otherworldly Drunkennes,
folio from a Divan of Hafiz. Tabriz (Iran), ca. 1531-33.

For example, Persian Sufi poets would write about drinking wine and the jubilation from drunkenness, however the wine was a metaphor for spiritual awakening and drunkenness on divine love. Similarly, certain symbols found in the fine arts would correspond with non-orthodox cosmology or concepts, such as the seven planets, sun symbolism, or even objects with double uses in mystic rituals. These unobtrusive and non-overt symbols were considered acceptable to the ruling orthodox class, along with some not so guised outward displays of subverted faiths. In addition, certain strands of liberal orthodoxy were allowed within orthodox regimes.

For example, while many regimes were strongly Sunna, Sufi communities were acceptable as a mystic brand of Sunna orthodoxy. Many Shi’I mystics would hide under the umbrella of Sufism in order to escape persecution. Some would test the boundaries and openly express their views. ISIS’s version of ‘appropriate Islam,’ however, is so narrow that even other orthodox Sunna may be killed just for one random act like having a beer or speaking to a member of the opposite sex. Their extreme policy means that there are no grey areas, leaving no space for creative expression or interpretation, resulting in the negation of real or lasting culture. In addition, they prey on young impressionable youth and indoctrinate them. Unlike medieval Islamist regimes, discourse and developments in philosophy and the arts is not one of their main focuses.

The people living under ISIS are so scared to do anything that will counter the narrow interpretation of Islam that they are unable to create or express their ideas. The result is a traumatized and inhibited community with no local culture, the opposite of medieval Islam where many new ideas, philosophies, and sciences, led to a golden age of Islamic culture.

In modern times, free thought and information are heavily suppressed under Islamist regimes. These range from the extreme ISIS beheadings to less widely exposed Egyptian, Saudi, as well as other extreme sentences for people challenging the status quo. In almost every authoritarian Islamist modern government, liberal values (human rights, women’s rights, animal rights, gay rights, religious freedom, sexuality, intoxication) are seen as anti-religious and destructive. Many Muslim artists who have an opinion or interpretation counter to that of the ruling Islamist regime within their country are forced to move abroad to the US or Europe.

“ISIS’s extreme policy means that there are no grey areas, leaving no space for creative expression or interpretation, resulting in the negation of real or lasting culture” 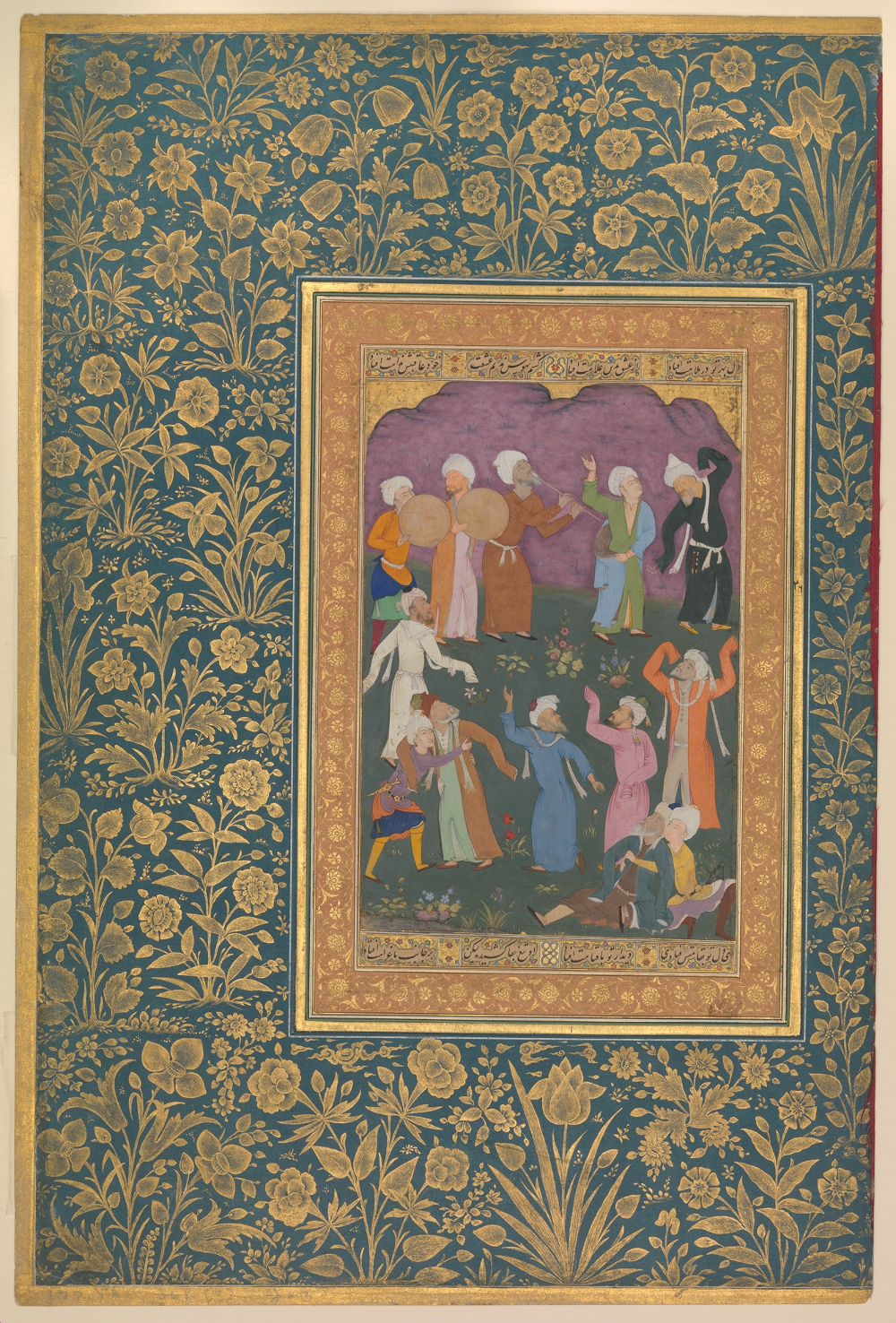 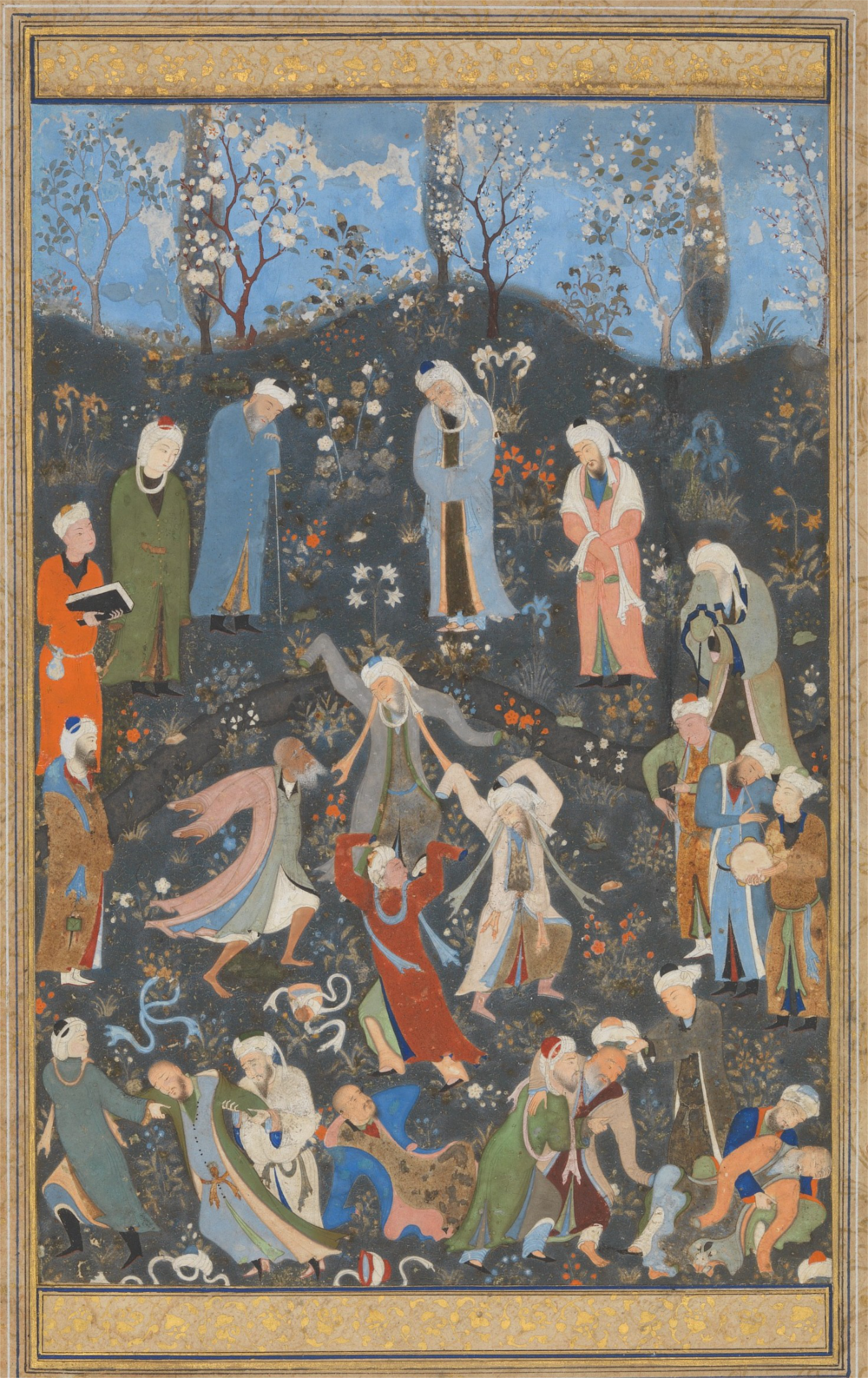 Detail of Dancing Dervishes
folio from a Divan of Hafiz Herat (Afghanistan),ca. 1480.