The Materiality of Resistance

“Existence is resistance,” says a Palestinian translator at the Balata refugee camp near Nablus. “Education and restoration,” he adds, take priority in his life over everything else. For this young Palestinian, education is the surest means of resisting the totalistic “overcoding of social life” that accompanies the occupation. Arguably the most potent emblem of the Israeli occupation in recent years is the Barrier that is rapidly enclosing the West Bank on itself. A Palestinian retiree from Abu Dis, a town that borders on Jerusalem and is located on the wrong side of the wall, states in concrete terms this overcoding of social life that the wall has inaugurated. “It’s so depressing that I can’t stay at home anymore,” he says, while standing under the wall’s shadow, “The wall changed everything, even the quality of the light.”

Bethlehem, a West Bank town close to Jerusalem, has historically been one of the world’s most hospitable spaces. The city is enriched and even sustained by tourism, which made up at least sixty percent of its economy before the wall. But, in a regime dominated by the Barrier, those very qualities that in normal times would prove a boon to a tourist-driven economy are a burden and a source of economic strain.

Referred to locally as the jidar al-fasl al-unsuri (wall of segregation) and by the Israeli state as the hafrada geder (separation fence), the Barrier is defined by its architects as essential if terrorist attacks are to prevented. For Bethlehem, it is hard to understand how this structure, made of concrete lined with barbed wire, could be described as a mere fence. Viewed from outside the Occupied Territories, however, the label makes more sense. The wall appears less intimidating from the vantage point of an Israeli road, where it resembles a highway barrier looming in the distance, or a mirage that flickers according to the angle of the sun. 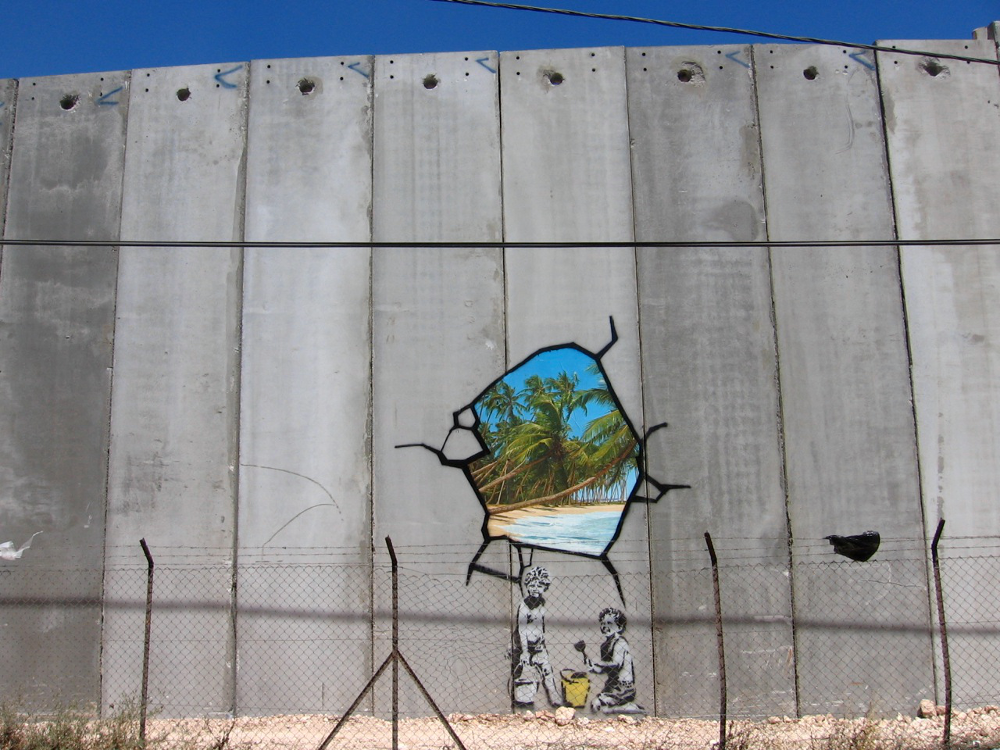 The material substance of the wall varies according to the territories it intersects. In some places, it is a series of electric fences, and in others a configuration of wires and cameras topped by a watchtower, which, however, is only rarely staffed by a guard. For most of its length, the wall is a tall concrete slab fronted by wires and surveillance mechanisms aimed to prevent anyone from touching it. The wall in Bethlehem affords something of an exception to this pattern, in that large swathes of grey cement are left unprotected by barbed wire, making it easier to approach and to turn into a work of art.

“As an international symbol of occupation, the wall circulates through aestheticized international circuits of political activism”

By virtue of its overreaching architecture, as well as by wide semantic range that is employed to describe as well as to engage with the wall, this structure offers several valuable lessons in the politics of scale and location. As an international symbol of occupation, the wall circulates through aestheticized international circuits of political activism. As a material and symbolic intrusion into Palestinians’ everyday lives, the wall is also intimately entailed in the experience of occupation. Bisecting houses and backyards, dividing families from each other, and radically restricting Palestinians’ freedom of movement, the wall ends by cutting through the self as powerfully as it bisects Palestinian land.

The first-time viewer of the apartheid wall will naturally wonder why it is necessary to bisect Palestinian territory with concrete. Far from promoting peace, the most palpable effect of the wall, which runs through rather than around the West Bank, is to separate Palestinians from Palestinians. The wall’s primary function is to intimidate. 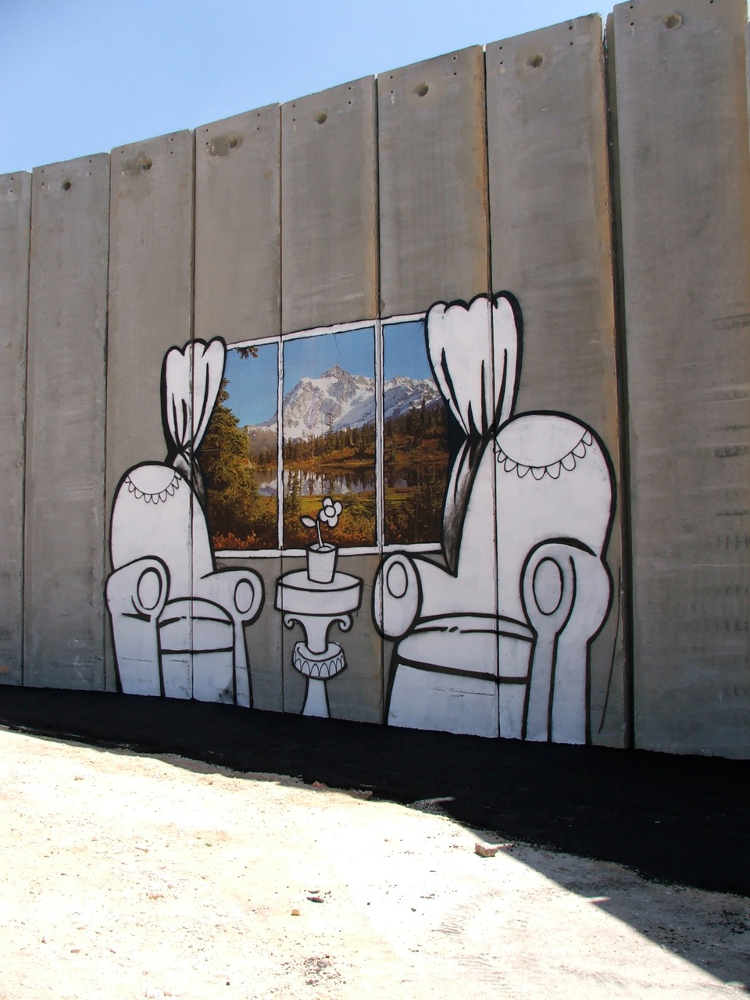 Together with adopting international languages such as English and Spanish, many insignia transplant allusions to European history onto Palestinian territory. Turning to Germany as the ever-present comparative foil for Palestine, a mural alludes to John F. Kennedy’s 1963 visit to West Berlin to offer US solidarity with the free world in the face of the communist threat. During this visit, Kennedy famously defined the city on the western side of the Berlin Wall as an outpost of freedom facing a Communist border zone. “All free men, wherever they may live, are citizens of Berlin,” Kennedy declared, “and therefore as a free man I am proud to declare ‘Ich bin ein Berliner’.” The parallels between the two walls are prescient.

In another case, Abu Dis is equated with the Warsaw ghetto. Both this message and the “Ich bin ein Berliner” inscription are more obviously rooted in German than in Palestinian pasts. While such graffiti attest to the interconnectedness of a world in the age of the world picture, they also call into question the tendency to incorporate the insignia into a homogenous narrative of local resistance. Collectively, these images show how European history is redeemed and avenged on Palestinian territory, often without the knowledge, consent, or participation of local actors.

While the majority of graffiti on Bethlehem’s wall is anonymous, there are exceptions, the best known of which is the UK-based graffiti artist Banksy, whose reputation was already well-established when he arrived in Palestine in 2002 to paint the wall.

“European history is redeemed and avenged on Palestinian territory, often without the knowledge, consent, or participation of local actors”

Banksy’s distinctive style has aroused considerable controversy among the local Palestinian population. By contrast, the international reaction has been more uniformly positive. Partly through the murals Photo by Ted Swedenburg. of Banksy and his cohorts, Bethlehem was transformed into a new tourist destination: every day, Palestinian minibuses of organized tour companies bring small groups of tourists to specific parts of the wall on which international graffiti artists left their mark.

By 2011, touristic interest in the graffiti on the wall seems to have faded. The attention span of the international community has in this instance proven characteristically brief, while the long-term political effect of the international activist community’s rendering up of the segregation wall as a global canvas have yet to be ascertained. When Banksy painted murals on the wall during a tour of the West Bank, he encountered negative reactions from local Palestinians who were displeased by his aestheticization of their suffering. “We don’t want beautiful,” complained one man, “we hate this wall. Go home.”

Banksy’s representations are provocations that are as likely to disturb local Palestinians through their trivialization of the wall and thereby of Palestinian suffering as to awaken the political sensibilities of his western audience. To the artist’s credit, Banksy occasionally foregrounds in his art the ethical ambiguities intrinsic to his aestheticization of the wall, and does not sentimentalize his politically comprised intervention. However, the fact that the artist registers these ambiguities does not relieve the viewer of the imperative to confront the political limitations of such forms of artistic expression. 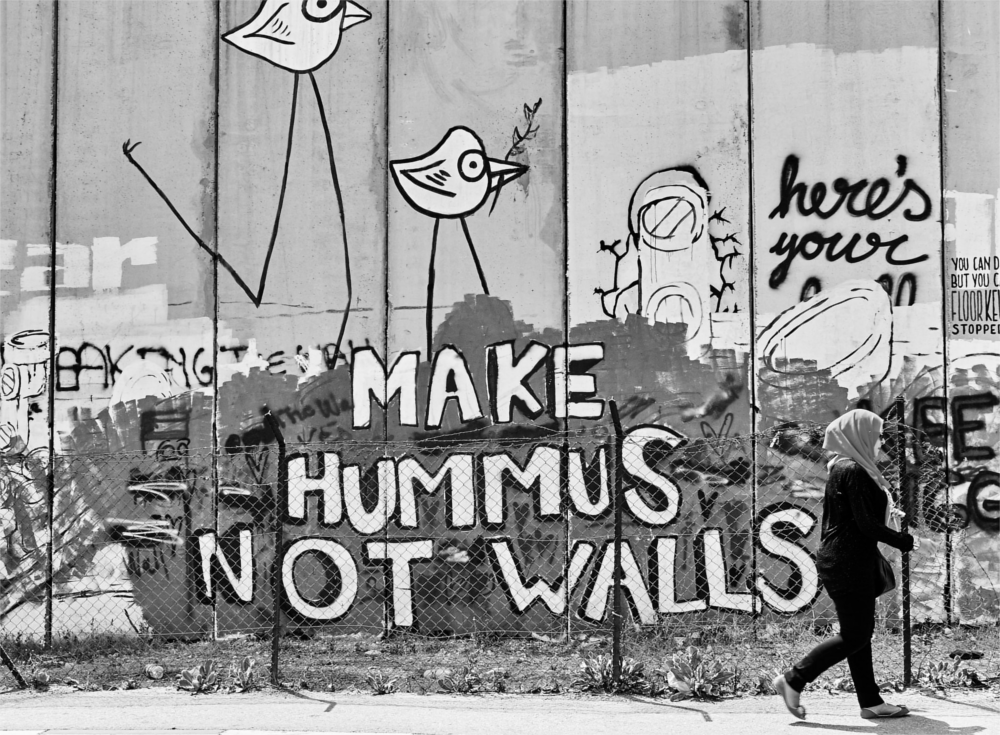 The globalization of representation is nothing new. Audience is key: a global public overdetermines the content, form, and substance of what is recognized as representable. Reflecting on the almost exclusively Arabic-language graffiti of the first intifada (1987-1993), anthropologist Julia Peetet noted how, on the rare occasions when graffiti was inscribed on Palestinian walls in English rather than Arabic, it was deployed to speak to the West. In keeping with its intended audience, the frequency of English-language graffiti increased with the arrival of foreign delegations. By encoding themselves as globalized testimonies, Palestinian graff iti, Peetet argues, “took their place among other forms of resistance” and came to constitute “a voice for those who felt voiceless in the international arena.” Such graffiti also anticipated the post-intifada West Bank wall as a global canvas.

“A global public overdetermines the content, form, and substance of what is recognized as representable”

Due to the complications of language choice and the historical allusions described above, the graffiti adorning the segregation wall today cannot be rendered so transparently in terms of a lexicon of resistance. Narratives of dispossession are inscribed on the wall, but these visual renderings are heavily interpolated by the perceived expectations of a globalized public sphere. Bethlehem’s canvas has been superimposed against the will of local inhabitants. As if in response to the coercive imposition of a massively politicized structure, the images on the wall pursue different representative strategies.

They evoke domesticity and daily life while often—if not always—avoiding the paraphernalia of conflict. They work through metaphors and historical allusions—above all to both pre and post WWII Germany— while avoiding incendiary calls-toarms. The graffiti on the apartheid wall too are the graffiti of resistance, but the resistance they narrate is mediated by a constellation of audience expectations more globally implicated than that which informs other graffiti elsewhere in the world. At the same time, this representation – al difference, which is fundamentally a difference in reception, attests to the many transformations undergone by the Palestinian resistance, together with its objects and subjects, since the first intifada. As has been shown, the apartheid wall’s graffiti consists largely of an archist slogans, deliberately ironic depictions of domestic bliss, and learned allusions to the speeches of John F. Kennedy.

For the most part, it would seem to include everything other than what one might expect to find on Palestinian territory: the local voices of resistance. Instead of resisting in the stereotyped sense, Palestinians are often most concerned with simply getting by. For this reason, Bethlehem’s ingenious local entrepreneurs have turned to the wall as a space for posting advertisements. With the outbreak of the second Intifada in 2001 and the subsequent stranglehold that followed on Bethlehem’s economy, local resident Joseph Hazboun shut the doors of his restaurant, which he imaginatively called Bahamas Seafood Restaurant, thereby himself evoking the global circulation of meanings that is Bethlehem’s forte.

As his restaurant directly fronted the wall at one of its highest points, Hazboun temporarily lost his entire customer base. Unable to keep his restaurant afloat financially, he relocated to the United States. Hazboun returned to Bethlehem in 2008. As he explains in a brief narrative posted directly onto the wall facing his restaurant, Hazboun decided to make the most out of a bad situation and painted his restaurant’s menu over the blank concrete surface.

Hazboun’s entrepreneurship has extended to using the wall as a screen to project the World Cup games for the viewing pleasure of his customers. After posting the Bahamas Seafood Restaurant’s menu to the wall, Hazboun rebaptized the southern extension of his restaurant as the “Wall Lounge.” He used this newly conceived space to showcase vistas of the barrier, fulfilling the principle that the death of a natural view encourages its artificial recreation, whether as an act of resistance or through sheer necessity. Hazboun’s initiatives inspired other local business owners.

Complementing local endeavors to use the wall to stimulate rather than to destroy their businesses, the wall is replete with commercial slogans that draw on the tropology of American capitalism. Highlighting the fabricated nature of the wall, visiting graffiti artists have added slogans such as MADE IN AMERICA and MADE IN KOREA beneath their designs. Another commercial slogan concealing a deeper message is an oversized prize ribbon painted by the Brooklyn-based artists’ collaborative Faile.

The ribbon is emblazoned with the inscription WITH LOVE AND CARE: NOTHING LASTS FOREVER formed to shape a heart. The message suggests that, as a foreign imposition, the wall is destined to fall. Such artifacts underscore the paradoxical death wish driving most art on this wall. Such murals, which are political in intent if not always in execution, fulfill their mission most thoroughly when they help to bring about their destruction.